It wasn’t the economic weakness of the crisis but the ideological one that harmed Europe most. Who wanted to be be part of the dominoes in the name of solidarity? Unfortunately, the dominoes of each member state provoked nationalist reactions. The region comprising the Lithuanian capital is one of the few cities where two nations claim to be at home.

Lithuania has the fate of at least four nations in its intersection: Lithuanians, Poles, Belarusians and Russians. 200, 000 Poles make up the biggest ethnic minority (6.1%) in the whole country (with Russians coming second at around 4%). The Poles are mainly concentrated in the administrative region of the capital, which is called Vilnius County. Here, the minority is a majority (61.3%) of the population. This can be explained by the common history of both countries which were united as one federal country, the Polish–Lithuanian Commonwealth, for 200 years.

Poles-Lithuanians: ‘too close to be friends’

With Poland we had common interests – the wars with the same occupants, liberation from communism and both Nato and EU membership,’ says Ruslanas Iržikevičius via email. He is the editor of the Lithuanian Tribune, a Lithuanian news internet magazine published in English. ‘After all this, we’ve had no common goal or enemy. It turns out now that we are too close to be friends. Even by the 19th century, Lithuanians were afraid of being so similar that we might ‘become’ Polish. That’s when they started to look for their own identity. Even the Lithuanian alphabet was reformed to make it different from the Polish one.’ 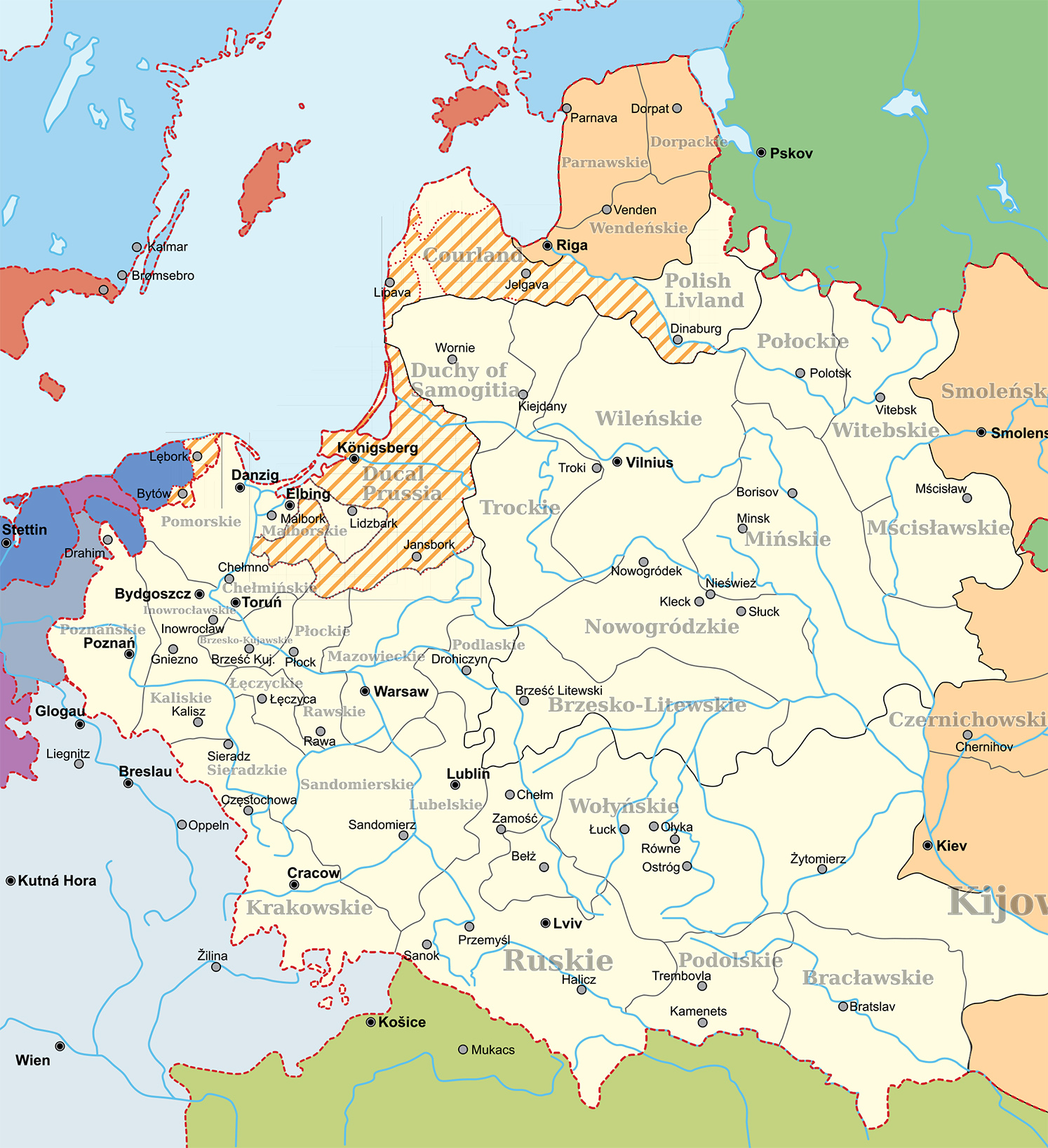 It was the spelling debate which recently provided the measure of the current Polish-Lithuanian temperature. In April 2010 the Lithuanian parliament rejected a governmental project to allow official documents to have any other letters except Lithuanian ones – Polish letters like w (‘vuh’), ł (‘eow’) and ń (‘nie’) and syllables sz, cz (‘sh’ and ‘ch’) were banned. What’s more, the decision was made during the official visit of the late Polish head of state Lech Kaczynski, which turned out to be his last. ‘Unfortunately, part of the Polish elite who still held a romantic vision of the close co-operation between Poland and Lithuania were on board this plane,’ explains Ruslanas, about the victims in the plane crash which killed 96 on 10 April. ‘It was very easy for us to maintain good relations with Poland. Now it’ll be much harder.’ On 13 April, it was announced that one Vilnius street would be named after Kaczynski – in Lithuanian spelling as ‘Kačinskio Street’, of course.

One anti-Polish view in Lithuania

‘You think that this is a pro-Lithuanian sentiment? It’s exactly the contrary. We are really afraid of this great love that Poland gives to Lithuania,’ says Gintaras Songaila, a Lithuanian MP in the ruling coalition, who brings the romantic notion back down to earth. It’s been rather difficult to get an interview with Songaila,who the Polish minority consider to be one of the leading anti-Polish figures. After repeated phone calls to his offices, somebody finally responds – albeit in Lithuanian to my questions in English. ‘No you speak Lithuanian!’ I hear, before being hung up upon. Only with the help of Justyna, a Pole of Lithuanian origins who works in Vilnius for an EU programme, can I get a one-on-one meeting.

During our meeting at his offices in the Lithuanian parliament, the MP corrects me on the misconceptions in Lithuanian society. ‘Of course we have the image of being homophobes and nationalists, but the level of tolerance here is really high. If somebody says that they don’t want to live with a Roma, it doesn’t mean that the next day they will come and kill this Roma. They are simply being sincere. Does that make them nationalists?! What do you find intolerant here? We really tolerated those homosexuals. But please don’t come here and propagate your ideology in schools and so on (referring to the law banning propagation of LGBT relations in public information – ed). It’s the same with Poles. Poland wants to dominate us culturally. Now they are using their position in the European Union. Some members of the European parliament fuss and cry about the situation of Poles in Lithuania, whereas it’s a paradise for them here.’

Will the European Union comfort everybody?

The biggest crybaby is Lithuanian MEP Waldemar Tomaszewski, who is also president of the biggest Polish minority political party, the electoral action of Poles in Lithuania (AWPL). According to some Lithuanian media, he is blackmailing Lithuania before Europe’s eyes. In his speeches he talks about the budget cuts for the Polish minority. ‘It’s true that in 2010 there were some financial cuts for the organisation of ethnic minorities,’ admits Anastasija Ismalova via email. She works at the office for national minorities at the ministry of culture. ‘But it was down to a general need for cuts. It should be pointed out that during the last two years Polish NGOs were still second on the lists amongst the ethnic minorities and NGOs when it came to financial funds.’

‘The crisis touched everybody but the minorities must be protected,’ argues Waldemar Tomaszewski, who I meet at his office in the Dom Polski (‘Polish House’) building, which is like a cultural meeting ground for related Polish parties. It’s noon and he offers me a shot of cognac to start our chat off, before downing his own. ‘It’s true that after Lithuania’s accession to the EU, we may be more effective while demanding our ‘Polish’ rights. But in reality, the tension between Poles and Lithuanians is not reflected in society. It’s not a real problem, but more a political one. There are even some Lithuanians who vote for our party because they appreciate our christian democrat ideology.’ Gintaras Songaila also admits that ‘it’s more a problem of the political establishment.’ Is Polish-Lithuanian politics created then in isolation of the reality?

How do you make politics…

‘Politics and everyday reality are two different worlds,’ says Beata Lachowiz, a Polish-origins Lithuanian student of archives and record management at the university of Vilnius, over a cafe in the centre. ‘Vilnius is a really multicultural city. The more different cultures a man has, the richer he is. When I go down the street, I don’t only hear one language. When I come to Poland, I miss this diversity.’

‘Nationalism in Lithuania doesn’t make any sense because small countries need to stay open if they want to survive. With Poland, we are almost the same country (Lithuania),’ explains Karolis Saduikis, former president of the Polish-Lithuanian academy, which organises cultural interchange for students between both countries. ‘The project is mainly about intercultural communication,’ explains Ieva Žilinskaitė, organiser of this year’s academy and politics student at the university of Vilnius. ‘We want to revise our notion of Poland, and find out the way in which the young Poles think. Do they live like us?’ Despite the crisis, these young people do not have any financial problems with the organisation of the project. Both Lithuanian and Polish parts of the project get funding.

‘The problematic questions like Polish transcription and so on are more important to politicians who may turn up on television,’ explains Antanas Manstavičius, politics student at the university of Vilnius, who I meet at an Indian cafe-restaurant downtown. ‘I have both Polish and Lithuanian friends, even if I never thought of them as having separate identities,’ adds Agnieszka, a Polish-origin second year student at the university of Vilnius, who I first meet at the Dom Polski building during a meeting discussing Polish education in Lithuania. ‘I never differentiated between them – for me a person is a person.’ Is it true there are really no tensions?

‘There are more nationalist reactions after the crisis though,’ admits Jozef Kwiatkowski, president of Macierzy Szkolnei, an organisation which supervises Polish schools in Lithuania. ‘When it’s hard, you look for another problematic as an excuse – the common enemy for the nation. Now in Europe there’s a tendency to create a European person, but it is difficult to say how it will end. Nobody knows what kind of society will grow from these young nationalist groups who walk down the streets of Vilnius now.’